On the first day of the New 2021, we bring you a recapitulation of the most important events in the media and telecom industry published on the Media daily portal in the past 2020.

We published a total of 3,200 new articles last year, and our portal was visited by 169,249 users, which is 19% more than in 2019. We published 55 exclusive news that you first read on our portal, we published about a hundred original analyzes that you could not find anywhere else, many key people in the media spoke for our portal, we actively supported various initiatives, we are working on two new regional media books, we conducted the third Selection for the best regional news portal, and at the end of the year we started with our online panels.

Despite the Covid-19 pandemic, we are recording an increase in subscriptions to our portal, for which we are grateful. We are pleased to have become your reliable and everyday source of information from the media and telecom industry. We hope you will support us again this year. Now is the right time for new subscribers as well. Contact us!

We present the 2020 review in four parts. Today is the period from January to March. 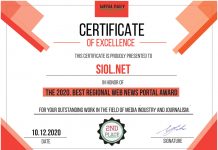 Who are the possible buyers of the Siol.net portal?